pfSense and my Experience One Year Later

For the last year, I’ve been running the pfSense software on an old PC I outfitted with a small HDD (~ 80 GB) 4 GB RAM, and 2 extra 1 Gb/s NIC cards. I followed some very simple online instructions to do the base setup, though it’s probably not really needed, and then setup my firewall rules for accessing the internet from either NIC. My home network is a bit large, and messy, so I have two networks I run with the pfSense box sitting between my internal networks, and my modem.

Initially, you need a monitor and keyboard for the actual pfSense box, but once you’ve done the initial setup, pfSense has a very nice WebGUI that can be accessed remotely within the network.

So, once setup, you can run headless, and just let the box run. 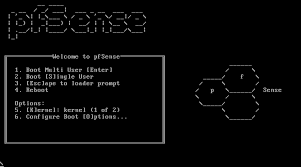 Even if you have a monitor, you really just see a screen like the one above, and nothing is really happening on that machine anyway. There are times where having SSH installed and enabled is useful, but that can be done through the WebGUI as well.

I’d say I’ve only need the console once in a year, until this week that is.

I probably only rebooted the pfSense box 3 times all year. Running BSD Unix makes it extremely stable, and really doesn’t need a reboot most of the time.

This past week, however, my little PC power supply burned up, and dies. I thought about just replacing it, but it’s a custom built PC that I’ve had for 13 years, and I decided it was time to let it go. I had another PC that I was able to replace it with, and simply moved my pfSense drive, and 2 NIC cards over.

I did have to run back through some basic setup, requiring the monitor and a keyboard directly attached, but it was brief. Next, I connected up my cables, and I’m back up and running.

I really like this software! Completely amazing, and worth every second of your time. I’ve used it over the past year to test out OpenVPN and network security.

What’s great is it has the built in capability for Captive Portal (you know, that things that makes you login to use internet at airports and hotels), IPSec, L2TP VPNs, Universal Plug N Play (UPNP), Dynamic DNS handling, and so much more.

I’m very pleased with it, and am thinking about adding a wireless card to turn it into a wireless AC router as well.