I wrote Chris after our last meeting and told him I though some visualization and GUI tools for some of the networking stuff in the *nix systems would be some thing pretty cool to think about working on. I know Linux Guru’s are still command line driven folks, but I’m a bit of a visual person, so I’d love to have some tools that help me visualize what my network is looking like, and potentially even help me trouble shoot when it can.

Like setting up routes, or doing traces, or visualizing a network and it’s subnets, and how they can and can’t communicate.

He has some cool ideas too, but in the spirit of the Forum, I’ll let him post them.

Edit
Adding a linke to something I’m imagining as part of this.

I’d like to have a utility that can ping and ‘crawl’ a network to do that mapping, then the user can fill in any holes they know about.

I’d also like something where I know what devices I have connected, show them, then drag and drop between them to make connections that are then setup in the background by the code. Maybe this is a bit sci-fi’ish, but it’s a thought. Of course, I’d have to learn a lot more about networking first.

Edit 2
I guess not so sci-fi after all. Found NMap.

As I was reading this thread my first thought was “NMAP.” It’s been out a long time, and it quite useful. I use it everyday.

Lots of awesome opensource network tools to be had.

Yep. I used it at the house, but found that with a firewall turned on it won’t even list the endpoint, so not sure if there is anything that can be done about that.

Here is a quick list of some ideas I’ve had regarding an open source software project. These are mostly biased towards topics which I want to learn more rather than attempting to fill some missing void in the Linux toolkit.

I thought it would be useful to consider some fundamental questions related to what we want out of this SIG to help
guide is along in the brainstorming processes. This will be particularly important for projects which require collaboration because a group could unite on some fundamental motivations and goals. Hopefully I’m not simply being pedantic, but I think we should consider our motivation and goals regarding projects in this group. Such considerations are, perhaps, necessary to shape our (individuals and group wide) list of topics and projects. I’ve made some lists of possible motivations and goals to illustrate what I mean.

The answers to these types of questions will set parameters on our list of topics, and it will also guid the progress of the project as well. It will also set a standard for reliability, documentation, packaging, etc. But, I also foresee problems arising when people wish to collaborate with one another but have differing motivations/goals but similar projects. For example, if Bob and Tom both want to write are both writing a GUI for latex, but Bob is only trying to learn how to write a GUI in GTK and Tom wants to make a software package. Then, their friendship will end when Bob’s nice GTK GUI doesn’t report latex errors properly or fails to compile on Macs or something.

I think another question to be considered is,

Do we each have to work on a single project together, or can group members work on differing projects and the report back on their involvement, progress, etc?

If yes, then would we gain as much by doing one versus the other?

I agree. I think that is a good question. It’s clearly a mixed bag, and I think it would be nice to see a bit of both. Just because someone doesn’t spend their evenings doing something, doesn’t mean that person doesn’t want to learn about it. Perhaps the best thing we can do is foster a collaborative environment and encourage people to jump in.

I thought these links would be of interest to this group.

In the Feb 7 meeting, I will give a brief overview on how to download, install, and prepare an IDE for use. It’s for C++ programming, which I’m by no means an expert at (yet), but I think the IDE itself is useful in many ways.

For the March meeting, I’m hoping someone can do something on using Git to clone, pull, push, commit code via Terminal. Then mirror how to do that with a GUI application. I found a pretty nice one called SmartGit that has a free personal version. Maybe show some alternatives to GitHub as well. I see OpenHub, but can’t tell if it’s a repo, or a search engine only.

For April maybe introduce a mock-up tool or two. Then we can start actually Designing and coding something. Throughout those, maybe Chris can also give some overview on Documentation software.

I’m happy to put some things together for the CLI git stuff. I don’t have any experience with the GUI git interface, but the git concepts will ramain the same.

How about we build a program to enable single-sign-on across the LBBLUG website resources? Maybe using OWIN or OAuth2.0

Or we could get a online check in process for BASTAS gift tracking?

I think this is definitely do-able, and I liked your idea about offering a Security bug bounty as well.

@mynameiscow just to update you, the idea about BASTAS, is a community service project that @tbaugh 's business runs each year to provide less fortunate senior citizens with a gift at Christmas. It is a huge undertaking and hard to track, so he has proposed a project where someone (or the Open Source group) could build an online selection and tracking tool for them to help make the process run more smoothly.

He will provide more details on the forum, and in the next meeting.

As for the bug bounty, @mem0lnx has collected some charitable donations, originally considered for a dev bounty. @daniel_ferguson thought it might be a good idea to make it a security bug bounty instead, and the open source group do it as a project.

@bmcgonag @daniel_ferguson @tbaugh BASTAS is an intriguing prospect, methinks. I like that relates multiple aspects of LUG and can serve as some cross-over between FOSS and Outreach SIGs. Can we set aside some time as a SIG to discuss this in more detail?

@daniel_ferguson @mynameiscow - and @tbaugh - Some time sounds like a good plan. I know Terry is going to be providing more detail at the next meeting so we can start working on designs, then move into project break-down, etc. 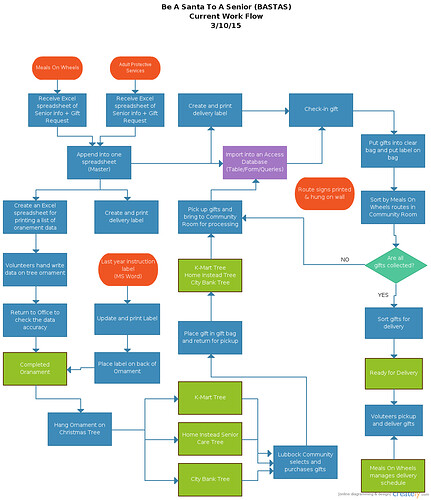 I have completed the work flow diagram of the Be A Santa To A Senior (BASTAS) project. Hopefully, it isn’t too confusing, but I wanted to make sure I had all of the steps. I will review it at our March 14th meeting, but you may want to take a look at it before the meeting. I had to upload it as a jpg file, because it wouldn’t let me upload a pdf file.
Please let me know if you have trouble with the file, and I can email it to you.

I’ve notice I have a duplicate process of “Create and print delivery label”. I will fix that before the meeting.

This is great @tbaugh! I hope we can knock this out design wise at the next meeting. Then we can start some development on it.

If we can make some reasonable progress on this by this summer, we should think about submitting a paper to the Texas Linux Fest.

The deadline is 28 June.

In the spirit of getting startedd with Design and thoughts on how to best approach the project for usability, I am adding a link to a site that has a free design tool. It’s available as a plugin / add on to Firefox browser.

It’s something you can use on Linux, and is free.

I suggest that you download it and play around with it a little. You’ll see it’s great for building visual screenshots of what we may want for the application.